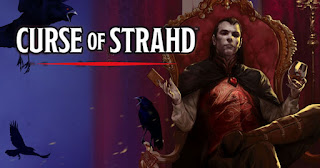 SPOILERS BELOW for The Beast of Graenseskov

The party, a second session at Level 2.

At the end of the last session, the party had spent their first night at Volchykrov Manor, sleeping at the Weary Horse Inn under the care of the landlord, Stravko Nosek. They have been commissioned to kill the Beast of Graenseskov. They also suspect a fellow guest at the Inn, Aco Koslov, a spice and coffee merchant, to be a vampire. Gaddock has summoned a familiar, which has been sent to examine the area near the Tree-with-a-Swing where the Knight Jovich was killed. We last saw them at the top of Gustav's Turret, having seen a graveyard in the woods and barrows to the north.

Coming down from the turret, the party return to Smithy and seek out Ruzina and her father, Uri. They commission her to silver Ser Adon's weapons, with Kel sacrificing the silver dagger he found in the monster hunter's old room in the to be melted down. The price of the work was that Ruzina could retain the unused silver. Initially the party resisted, but when they found out that Ruzina wanted it to silver weapons for her people, they were happy.

While she was working, they went back to the Tavern for a spot of lunch. Aco Koslov was at a nearby table, so Ser Adon decided to check if he was an evil undead vampire, quietly casting Detect Evil. He realised that he was undead (cold, no pulse) and evil. Koslov seemed to realise that he was the focus of attention and vacated the common room, heading to his bedroom. The party swiftly decided that such evil could not be allowed to live and planned to swiftly kill the 'vampire'. Roscoe went outside, under Koslov's room to manage any locals who showed interest. Gaddock's owl familiar (now called Hedwig) scouted the window and established that Koslov hadn't fled and seemed to be praying or meditating. Ser Alys smashed the door in, and then Kel and Gaddock both fire bolted Koslov. They all let Ser Adon (who was under the influence of Protection from Evil) attack first. He stuck hard and well, and a brutal battle ensued. Fire bolts, magic missiles and more flew. Aco fled through the window, attacking Roscoe who he grappled and bit, nearly draining his life. He remonstrated with his attackers that they didn't know what they were doing attacking him, and they should stop, but before he could say more, he was cut down with magic missiles, crumbling to ash. They searched his room and found a contract for 150 gold for the supply of coffee and spices with the Vistani's Raunie (leader). They found a box with 200 gold in; they paid ten to the innkeeper for the damage and split the rest.

The innkeeper, Stravko Nosek was horrified that they had killed a vampire and told them that they weren't welcome in his pub anymore. They would bring the wrath of Count Strahd down upon the town. The party swiftly realised that they may have put themselves in peril killing the vampire. They'd also put the Boyar on a collision path with the Count; does he let them deal with the Beast or hand them over?

The people of Volchykrov became increasingly disturbed as the news spread. It was clear that they were terrified and shutters and protections started to go up on windows and doors as people prepared for trouble. Ser Alys and Gaddock went to the smith and bluntly asked why the people were reacting as they did. On hearing the news, Ruzina decided that it was time that her father and herself visit their Vistani relatives for a few days. She explained that Strahd was in league with the Dark Powers, and was very dangerous, consorting with vampires, maybe even on himself. Gaddock was horrified that the people accepted this.

Meanwhile, Ser Adon found Father Fiofan in the chapel, and confessed that he had doubts that he had done the right thing. The Father told him that the Dark Powers were strong in Barovia, and that those of the light had to work carefully and quietly lest they rouse dangerous enemies. After further discussion, Ser Adon tried to give Father Fiofan her share of Koslov's gold, but he refused saying that it would likely draw the vampire in. He gave Ser Adon two vials of holy water and a healing salve, saying her need was greater than his.

Roscoe went to the infirmary to see the Halan Healers about his neck wound. Merje the Druid cleaned his wound (unbeknownst to Roscoe with Holy Water) and they discussed Strahd. He soon learned that Strahd was hundreds of years old, and that the Boyar had only found the Grey Sister's Tower because Merje had told him where it was to stop him burning down the woods to drive the Hags out. They also learned that there was an Abbey of Learning, along with several towns like Barovia and Valaki, deeper into Barovia to the west. Roscoe decided to have a sleep to recover.

The party gave Ruzina the money that the Vistani were owned by Koslov. She offered to take them to meet her people and the Raunie, but they declined, saying they needed to understand more about the Beast. She gave them directions.

The owl had reported back that there were children at the Tree-with-a-Swing and everyone except for Roscoe decided to go there. When they arrived, they searched magically, and found some gloves in the water that radiated magic. They hope to study these when they get a minute. The children were gone, but Kel and Sir Adon found a trail into the forest with sweets and candies. There was evidence of clothing snagged on the trees low down, as if from smaller children passing by. They realised there could be hags and witches preying on the children, so decided to rescue them. After a half mile following the trail, they sent word by Hedwig to Roscoe, who agreed to join them. Although his compatriots had refused to eat the sweets, Roscoe had no such qualms, enjoying them and collecting them. Whilst pressing through the forest, there was a track set from wolves with a very large Dire Wolf, and also an Elk which had been killed very precisely.

After two miles of walking, mid-afternoon, they emerged into a clearing with a gingerbread house bedecked with shiny things to attract children...

GM Notes: I had to remind the party at the start that Curse of Strahd and the Beast of Graenseskov were not balanced and they may need to run away at some point. They shouldn't assume they can win every encounter. The swift and brutal murder has really upped the stakes and the party have caught the attention of Strahd far earlier than they needed. They have also potentially alienated the locals, if the dark lord of Barovia choses to extract vengeance. It was good to get back into the game, although the next part may well be very dangerous.

Curse of Strahd will return on 28th January 2020

Dom
Yorkshire, United Kingdom
Engineer & Safety Professional, Gamer, Apple Addict, flirting with ChromeOS, Husband, Dad of 2 lads, Geek. Although I work as an engineering and safety professional, my other passions include roleplaying games and photography. I have written and published books for the Traveller RPG, and I'm one of the organisers of the Garricon RPG conventions in Sheffield, UK. Views my own.