Books in January and February 2018

I’ve added in the roleplaying games now, as I share this entry on The Tavern forum as well and that place includes RPGs in the ‘books read’ section unlike the late lamented UK Roleplayers site. I won’t be including part read RPGs.

This is a prop for the Cthulhu Britannica: London setting’s Curse of Ninevah campaign. I’d owned the PDF version for a while, and decided to pick up a physical copy when Cubicle 7 sold off their stock when their licence from Chaosium ended. Of course, as I was ordering the book, it went out of stock so I ended up tracing a new copy down on eBay. Hardbound, it’s the same kind of size as a Moleskine and tells the tale of an ill-fated expedition to Nineveh by a team from the British Museum. It isn’t the full story, but it does a grand job of teasing what went wrong. It’s enjoyable, and I think that players will lap it up if they get the chance to find and read it in the game. It’s not essential, but it’s a lovely extra. 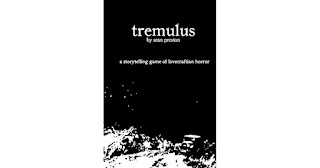 This was a re-read of a ‘Powered by the Apocalypse’ game which I backed on Kickstarter some time after I picked up Dungeon World. I’m planning to run it at Revelation, a roleplaying convention in Sheffield which will be over by the time that I post this. Tremulus is a game of Lovecraftian horror; it has a very bleak feel and the characters are very much expendable. I like the simplicity of the approach, which combines effectively with a structured playset approach where the scenario is built by asking questions.

This is the second journal made as a prop for the Curse of Nineveh campaign. This time, it is the journal of Neve, a young American woman which has travelled to the UK to spend time with relatives. Along the way, she stumbles into dubious activities which are linked to the Campbell expedition. It’s a teaser; Neve is meant to tell the characters much of this, but it fleshes out the backstory. Again, you don’t get anything near the full story; it’s a hook into the adventure. It is an enjoyable read through.

The third book in the Lyonesse trilogy, this tale picks up and weaves together happenings from the previous stories. Princess Madouc is one of the key protagonists in the tale, as she grows up and resists the King’s aim of marrying her off for a politically beneficial marriage. Along the way she discovers that her ‘pedigree’ is not what she expected, and that she has Faerie blood… I really enjoyed this trilogy. I wanted to pick it up and read it all again, straight away, which I may do quite soon.

I had to re-read the Sprawl because I was running the game at Revelation 2018. I really like the way this one works; chrome slick adaptation of ‘powered by the apocalypse’ principles with the tools to let you run heists and general illegality so they have the feel of a good movie. You do the legwork, and the mission is affected by the outcome. Good stuff. I may have to get a print of the black on white version though as my eyes aren’t quite what they were.

Set in decades after Brexit, the UK has become a frontline state in the battle of corporate owned America with the Europeans. The protagonists are an American unit fighting in Scandinavia, normal infantry in a high tech war with robots, biological weapons and Scions. Scions are a form of mech armour, which is effectively invulnerable to infantry, and usually used by board members and owners of companies. The team are sent to find out what happened when a Scion goes missing deep in enemy territory. I really enjoyed this - a cyberpunk war story.

Lychford is a small market town in the south of the UK which also happens to be at a juncture between worlds. A supermarket plans to build a new store, rearranging the geometry of the town’s roads, a decision which will break the protections that have been in place for centuries. An elderly local witch seeks allies to protect reality including the local Vicar and the New Age shop owner. I enjoyed the pace of this, and will be looking at more in the series. Unfortunately, my play experience showed issues with the moves and the balance of the stats.

Email ThisBlogThis!Share to TwitterShare to FacebookShare to Pinterest
Labels: Media

Dom
Yorkshire, United Kingdom
Engineer & Safety Professional, Gamer, Apple Addict, flirting with ChromeOS, Husband, Dad of 2 lads, Geek. Although I work as an engineering and safety professional, my other passions include roleplaying games and photography. I have written and published books for the Traveller RPG, and I'm one of the organisers of the Garricon RPG conventions in Sheffield, UK.